Most everything has been "right" for Robert Sarver. He credits his success to being "at the right place, with the right partners, at the right time." What perhaps has not been right in his life is that which he is most committed to change - heart disease. 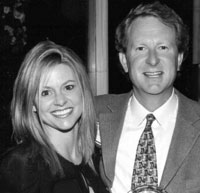 The Sarver family legacy is one of strong work ethic, tremendous fiscal savvy, solid commitment to the needs of the community, and extraordinary generosity in the advancement of worthwhile charitable goals. Unfortunately, the family heritage also includes a genetic pattern that, if untreated, renders Robert and one of his two sisters vulnerable to heart disease.

Robert's father, Jack Sarver, died of heart disease in 1979 at the age of 58. The family struggle against heart disease began in the paternal lineage generations before his birth. The childhood memories of his young father's valiant struggle motivates Robert, with three sons beginning the next generation of the Sarver family, to end "the heritage of heart disease."

One year before Robert was born, in 1960, his father and mother, Irene, moved to Tucson and began a history of distinguished service to the community. The name Sarver became synonymous with fine hotels as Jack began an industrious building program to host Tucson's visitors in style. He also founded and managed American Savings and Loan until his death.

While in his forties, he read of the early efforts of surgeon Denton Cooley. The following week he flew to Texas and was among the first in an experimental group to undergo bypass surgery. It was a move that gave him 10 more active years with his family and his beloved wife, Irene, who continued her very active community involvement in Tucson and served as a member of the Arizona Cancer Center board during her lifetime.

Penny and I look at this not so much as a donation, but as an investment. An investment in the people working here, and an investment in the promise that they can discover new ways to prevent and treat heart disease, which takes the lives of more Americans than any other cause. As with all our investments, we look for high returns. This one will be no different..

A 1982 graduate of the University of Arizona, Robert earned his bachelor's degree in business administration. At the age of 23, he founded National Bank of Arizona and served as president until its sale in 1994. He now serves as the executive director of Southwest Value Partners, a real estate company that owns 419 commercial properties throughout Arizona, California and northern Canada. Robert also serves on the board of Monterey Homes, and he recently retired as chairman of Zion's Bancorporation, the parent company of Grossmont and National Bank of Arizona and the fifth largest bank in California.

Robert's wife, Penny, is a native of Kansas City and earned her bachelor's degree in business from the University of Oklahoma in 1990. Following her graduation, she moved to Phoenix, where she accepted a job with Prentice-Hall, marketing textbooks to universities. She and Robert met in 1991 in Scottsdale and were married Nov. 2, 1996. Their growing family includes three sons: Max, Jake and Zach.

The Sarvers' connection to the Heart Center was sealed on Jan. 16, 1998, when Humberto S. Lopez, then president of the Center's Advisory Board, announced: "It is a pleasure to introduce to you Robert and Penny Sarver. Robert and Penny come from a generous family rooted in the most active and respected charities in the state. I have known Robert for years through college. He is one of the most astute and wise businessmen I know. He and Penny have shown the foresight that characterizes their family in their decision to make a major gift to University Heart Center. Upon the approval of UA President Peter Likins, a committee of the faculty and the Arizona Board of Regents, their gift will result in the naming of the Sarver Heart Center at the University of Arizona. We look forward to their involvement with the Heart Center for years to come."

"Donating money is the easy part. Many members of the Heart Center's Advisory Board spent a great deal of time and energy and we just feel fortunate that we are able to make a gift to see the building campaign come to a successful end.

Penny and I are fortunate that our parents taught us to give a little back when we have been successful. We are fortunate to be able to do that. Our sons may not understand that now, but they will one day and this will be something that they can be very proud of, too.

I remember my father's trip to Houston many years ago. He went one day to get checked out and they told him the next day he would be going in for surgery. Following his surgery he counseled people who were considering whether or not to have open-heart surgery and were scared. He spent a lot of time visiting with other people and helping them to come to terms with the decision about whether to go through with this new procedure.

He was an initiator, a creative guy who liked to be on the cutting edge. I feel this is something he would be very proud of as well.

I am a business entrepreneur and this center is exciting for me because I see it as very entrepreneurial. The work here is focused on unique ways to cure heart disease and educate people about how to prevent the devastation it causes.

Penny and I look at this not so much as a donation, but as an investment. An investment in the people working here, and an investment in the promise that they can discover new ways to prevent and treat heart disease, which takes the lives of more Americans than any other cause. As with all our investments, we look for high returns. This one will be no different.

We greatly appreciate the opportunity to be a part of this center," said Robert Sarver in 1998.