The Sarver Heart Center was founded as the University Heart Center in 1986 with the goal of preventing and curing cardiovascular disease through the three pillars of research, education and patient care.

Renamed in 1998 in recognition of generous support from the Sarver family, the Center is composed of more than 150 physicians and scientists with national and international reputations. Their goal is to bring together scientists from complementary backgrounds and expertise to work collaboratively toward a future free of heart disease, vascular disease and stroke.

In the fall of 2000, the Sarver Heart Center dedicated its new home, a 30,000-square-foot, three-story addition to the original College of Medicine building. 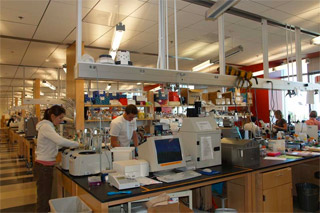 Equipped with several state-of-the-art research laboratories, the Center recruits world-class faculty and researchers to help in the discovery of the scientific advances of the future under the Molecular Cardiovascular Research Program (MCRP), established in 2006. At that time, the UArizona College of Medicine’s Medical Research Building opened, providing a place where basic scientists are studying the molecular mechanisms underlying cardiovascular disease with the goal of developing new preventive and therapeutic approaches. Carol Gregorio, PhD, director of the MCRP, was appointed co-director of Sarver Heart Center in 2007.

“We have a highly collaborative environment here. Historically we’ve talked about moving research from ‘bench to bedside,’ or from the laboratory to the patient-care setting. Now, with our focus on state-of-the-art approaches including genomics, imaging, modeling, advanced cell and molecular biology and biophysics, together with our human cardiac biorepository, we’re equally likely to take discoveries from the bedside to the bench and back to the bedside in the form of precision medicine. We are developing approaches to utilize patient blood samples in the basic science setting to study more precise treatments for each particular patient’s health condition,” said Nancy K. Sweitzer, MD, PhD, Director of the UA Sarver Heart Center and Professor of Medicine and Chief of Cardiology at the UA College of Medicine - Tucson.

A History of Firsts 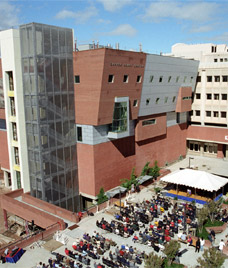 According to a study published in the New England Journal of Medicine in 2006, life expectancy increased about seven years since 1960, and 50 percent of this increase was attributed to improved health care. Of that, about 70 percent of the longevity gain from health care was due to advances in the fight against cardiovascular disease. Sarver Heart Center has been at the forefront of this progress.
Here are some of the firsts from Sarver Heart Center:

2012 – Interventional cardiologists launched the Transcatheter Aortic Valve Replacement (TAVR) and the Structural Heart Disease programs, when they performed the first TAVR procedure in southern Arizona, replacing the aortic valve of an 80-year-old woman considered too frail for open-heart surgery. This minimally invasive catheter-based treatment provides a lifesaving option for patients who are considered too ill to survive open-heart surgery to replace severely blocked aortic valves.

2011 – Pediatric cardiologists Ricardo Samson, MD, and G. Michaels Nichols, MD, are the first in Arizona to use a catheter to replace a pulmonary valve, avoiding open-heart surgery for their 26-year-old patient.

2010 – the Journal of the American Medical Association (JAMA), published results from a five-year study of the Resuscitation Research Group that showed bystanders were more likely to do chest-compression-only CPR and a person’s chance of survival from sudden cardiac arrest doubled when this simpler method was used. The method was adopted by the American Heart Association in 2010.

2008 – Dr. Frank Marcus and his team established an international registry for individuals diagnosed with ARVC and its progression; including the chromosomal loci, specific gene mutations, and the genotype/phenotype associations linked with this disorder.

2004 – the UA Sarver Heart Center Resuscitation Research Group introduced Cardiocerebral Resuscitation, a new method for bystanders and for paramedics. Initiated in Tucson and two counties in Wisconsin, it expanded to selected cities in Arizona in 2005; then Kansas City, Mo., in 2006. In each area, survival of patients with primary cardiac arrest improved dramatically, a breakthrough that gained the group international recognition.

2001 – Dr. Frank Marcus and his team set clear guidelines for diagnosis of Arrhythmogenic Right Ventricular Cardiomyopathy (ARVC), a congenital heart disease that can cause cardiac arrest.

2000 – the Sarver Heart and University Medical Center Cardiothoracic Transplant team began to study the “Berlin Heart,” a ventricular-assist device that is attached to a child’s heart to provide relief. The device helps strengthen heart muscle to overcome congenital cardiomyopathy, eliminating the need for a transplant.

1997 – The Samuel and Edith Marcus Visiting Professor in Cardiology was established by the Dr. Frank Marcus along with his siblings for the enhancement of education and research for students, residents, fellows and faculty in cardiology.

1990s – based on their experimental lab findings, the UA Sarver Heart Center’s Resuscitation Research Group, led by Dr. Gordon A. Ewy and Dr. Karl B. Kern, and their CPR research colleagues, began advocating a new method of CPR: continuous chest compressions (without breaths) to aid people who collapse due to primary cardiac arrest.

1986 – The UA Sarver Heart Center was founded as the University Heart Center under the direction of Drs. Jack G. Copeland and Eugene Morkin with only a few members.

1986 – Dr. Frank Marcus published his discovery that radiofrequency energy was a safer substitute for DC energy in eliminating sites of arrhythmias in the heart. This technology is now used worldwide on a daily basis to treat different types of arrhythmias.

1985 – Dr. Jack G. Copeland became the first surgeon in the world to perform a successful bridge-to-transplant procedure using an artificial heart to replace the diseased heart of end-stage heart failure patient while waiting for a donor heart.

1981 – Dr. Frank Marcus occupied the Distinguished Professor of Medicine chair dedicated to the prevention of sudden death from Arrhythmogenic Right Ventricular Cardiomyopathy (ARVC), and subsequently became a world authority on this condition.