Atrial fibrillation is such a very common heart rhythm problem, particularly in people over the age of 70, that its treatment deserves special mention. As in all heart rhythm problems, medications may be sufficient to control symptoms. If medications are insufficient, then an ablation may be recommended. There are two different types of ablations that are performed for atrial fibrillation:

A procedure intended to either cure or control the frequency of episodes. In this procedure patients are first asked to undergo either a CT scan (Figure 1) or MRI scan of their heart to show us the anatomy of the left atrium and the pulmonary veins, which drain into this chamber. This helps us to plan the procedure. The day before the procedure, the patient will undergo a transesophageal echocardiogram (TEE) where an echo is done from a probe that is swallowed into the stomach. This is performed to make sure there are no preexisting clots in the heart. If there is a clot, then the procedure cannot be performed as there would be too high a risk of causing a stroke. The next day, the ablation procedure is performed.

The ablation procedure is similar to what is described above for the TEE. In addition, we utilize a catheter down the nose into the esophagus so we can see where the esophagus lies in relation to the left atrium. We create a three-dimensional geometry of the heart using the electrical signals from our catheters and we cauterize muscle tissue in the left atrium to electrically isolate the pulmonary veins from the left atrium, and also to target certain other areas of muscle tissue in the left atrium that are electrically  complex and likely to contribute to the perpetuation of atrial fibrillation. Complications are rare, but can occur. In addition to the blod-clot complications mentioned above, there is also a small risk of narrowing a pulmonary vein, a risk of causing a stroke, a risk of damaging the nerve to the diaphragm, and a very remote risk of damaging the esophagus.

This type of ablation is intended to help with the symptoms of rapid heartbeat with atrial fibrillation. In this procedure, the patient is first implanted with a pacemaker. The AV node is then cauterized, inducing a state of complete heart block. The pacemaker then takes over with generating the heartbeat. Atrial fibrillation still is ongoing in the upper chambers (the atrium), but the ventricles now will be entirely under the control of the pacemaker. This is a relatively simple procedure that is very useful for older people wishing to get off the heartrate slowing medications that they need to take to keep their pulse under control. This procedure however, does not prevent the risk of stroke, and warfarin may still be needed. 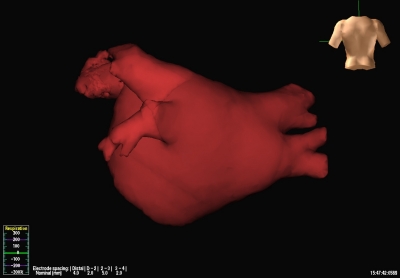 Figure 1: Before an ablation is performed for atrial fibrillation, a CT scan is done of the heart to see the configuration of the pulmonary veins. This is a view from the backside of the left atrium, and four pulmonary veins are shown.