The normal heart beat begins in the sinus node, located near the top of the right atrium. (See Figure below.) This electrical impulse spreads over the atrium, causing the atria to contract to pump the blood into the ventricles. But for the atrial impulse to get to the ventricles, it must go through the AV node and the His Bundle.  The electrical impulse then travels down the bundle branches to the ventricular muscles, causing them to contract, producing a heartbeat that pumps the blood to the body. The normal heart rate is between 60 and 100 beats per minute.

Normal conduction from the atrium to the ventricles 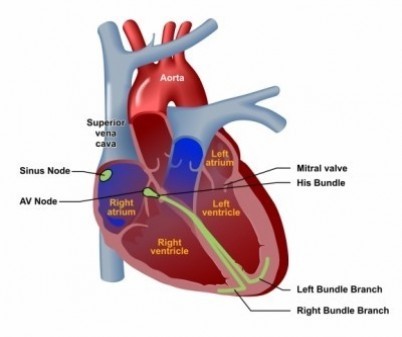 The electrical heart. Each heart beat is started electrically at the sinus node. Then the electrical impulse is carried to the AV node and relayed to the ventricles over the left and right bundle branches to the heart muscle.

An abnormally slow sinus heart rate is called the “sick sinus syndrome” and, if severe, results in symptoms of fatigue. In some such cases a permanent pacemaker is needed to be implanted to generate a normal heart rate. Many people with sick sinus syndrome also develop atrial fibrillation. These individuals have intermittent heart rates that are often either too fast or too slow.

From the atrium, the electrical impulse is carried through the AV node, which sits as an electrical “relay” between the upper chambers (atria) and lower chambers (ventricles). Slowdown in the AV node can be another cause for bradycardia, in which not all the sinus node discharges can make it through to the ventricle, a form of heart block. Sometimes the AV node slows down due to medications, which need to be adjusted.

Placing a pacemaker: Pacing leads (one to three) are positioned through the vein under the collarbone (subclavian vein) into the heart chambers and affixed to the heart muscle. These leads then are connected to the pacemaker generator, which is placed under the skin in the front chest region just below the collarbone. This procedure is performed in the electrophysiology laboratory and typically takes about one to two hours. If a third lead is needed for what is called “biventricular pacing” for heart failure, the procedure may take up to three hours.

Follow up and monitoring: The patient will have future follow-up appointments in the pacemaker clinic and can be followed remotely with a home monitoring unit. Very little in the typical environment interferes with a pacemaker. It is fine to use microwaves and cell phones, but not placing the cell phone directly over the device. A patient with a pacemaker cannot get an MRI, but a CT scan is all right. At the airport, the device will set off the metal detectors, so inform security that you have a pacemaker. At stores with anti-theft devices at the door, patients should simply walk through and not linger by the door.

Tachycardia refers to a situation where the pulse is faster than 100 beats per minute (bpm). Sometimes this is absolutely normal. For instance, with exercise it is entirely appropriate for the pulse to rise above 100 bpm. However, when tachycardia occurs at rest, a cardiologist needs to determine the specific cause.

The first question is whether the tachycardia is originating from the upper chambers (“atria”) or the lower chambers (“ventricles”). Ventricular tachycardia refers to a fast heart beat that originates from the ventricles and can be potentially dangerous.

If tachycardia originates from the upper chambers, it will be one of three types:
1) Atrial fibrillation
2) Atrial flutter
3)  Supraventricular tachycardia (SVT for short)

Atrial fibrillation is a chaotic, electrical disturbance of the atria in which an electrical impulse travels in a disorganized, very rapid fashion throughout the atrium. This electrical impulse then travels to the AV node and the rest of the conduction system to the lower chambers (ventricles) in an irregular fashion, resulting in a heartbeat that is perceived as irregular and often fast. It is the most common rhythm disturbance in older Americans, affecting 2.2 million Americans with an average age of about 75 years. Some people are very aware of their atrial fibrillation – they notice that their heart is beating very irregularly, without any pattern whatsoever and fast. Other people are completely unaware of being in atrial fibrillation. Most people are aware of this rhythm some of the time, but not at other times, even when they are certain that they can detect it “perfectly.”

Atrial fibrillation puts people at significant risk for a stroke. So, medical guidelines advise medication to thin the blood for those at risk for stroke. Some patients can be treated with aspirin, depending on their doctor’s assessment.
Atrial flutter is a heart rhythm disturbance that is similar to atrial fibrillation, except that the electrical discharges are semi-organized. An electrical impulse will typically revolve around the tricuspid valve. Patients with atrial flutter may feel the same symptoms as those with atrial fibrillation – a fast and irregular heartbeat, though maybe not quite as irregular. Atrial flutter also carries a potential risk for stroke and all the same indications for blood thinners, as outlined above, still apply.

Supraventricular tachycardia (SVT) is a fast heart rhythm disturbance that can be seen at any age. People will describe that their heart suddenly starts racing –it goes from a normal 60 beats per minute to as much as 150 to 200 beats per minute, and then stops just as abruptly.

Ventricular Tachycardia, which originates from the ventricles and is related to the lethal rhythm called ventricular fibrillation is the most critical and potentially dangerous of the lower-chamber tachycardias. Cardiac arrest in this country often is caused by these types of serious rhythm disturbances, so making an accurate diagnosis is very important. Ventricular tachycardia usually occurs in people who are having or who have had heart attacks.

Biventricular pacing or “cardiac resynchronization therapy” is a special type of device that is usually coupled with an ICD to treat heart failure patients who have severe symptoms related to their heart failure and have evidence of an electrical condition called “left bundle branch block.” In this type of block, the electrical signal travels very slowly from the right side to the left side of the heart, causing the heart muscle to contract in an uncoordinated fashion. A pacing lead can be placed from a vein inside the heart to the left side of the heart to re-coordinate the heart and to improve symptoms of shortness of breath.

Electrophysiology (EP) Study and Ablation. This is a procedure where a fast heart rhythm problem can be treated by directly burning (cauterizing), or heating, the muscle tissue that is responsible for the problem. Cardiologists use x-rays to guide placement of catheters (small “spaghetti-sized” electrodes) into the veins (and sometimes artery) in the upper thighs of the legs. The catheters are positioned inside the heart in specific locations to record the electrical signals. Doctors then induce tachycardia and analyze how the heart is electrically activated to determine the areas that are responsible for starting or perpetuating the abnormal rhythm. Energy (typically radiofrequency) is then applied at that spot to cauterize the muscle tissue responsible for the abnormal rhythm. The success rate depends on the type of heart rhythm problem being treated and is greater than 90 percent for most heart rhythm problems. For ablation of atrial fibrillation, the success rate depends on the nature of the problem, but is usually between 60 and 80 percent.